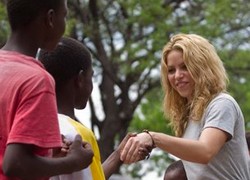 PORT-AU-PRINCE, Haiti- Recording artist Shakira one of the performers on the Hope for Haiti Now Telethon on CNN in January 2010 is searching for suitable land to build a school for needy earthquake survivor’s children in Port Au Prince. Shakira she announced an initiative to build a new school in Haiti through her Barefoot Foundation. The Foundation will work in partnership with Architecture for Humanity to build the school and NGO partners to provide education, school meals, clean water and sanitation services. Foundation board member Howard Buffett, World Food Program Ambassador Against Hunger and chairman of the Howard G. Buffett Foundation, will fund the school feeding component of the initiative and other related services.

“There is a great need for immediate aid in Haiti, but also for longer-term reconstruction” said Shakira. “For that reason, we are doing our small part to help Haiti rebuild and give the children affected by this disaster the chance to learn and thrive. I hope we can use some of what we’ve learned working in Colombia to help Haiti’s children recover. When we educate children we empower societies, and right now Haiti needs all of our help. ”
Shakira was born in Barranquilla, Colombia. She revealed her talent as a creative artist at a young age by writing little notes to her father, who encouraged her to record her thoughts and feelings. Her family’s encouragement sparked her love of music and performance. In the beginning of 2006, Wyclef Jean joined Shakira to record the second single for the album. “Hips Don’t Lie”, the biggest hit of the 21st century, became Shakira’s first number one single on the U.S. ‘’Billboard Hot 100’’, in addition cracking number one in at least 55 countries. Shakira and Wyclef Jean also recorded Bamboo version of this song for official theme of FIFA World Cup 2006.

The Barefoot Haiti School will be modeled after the work of the Fundación Pies Descalzos; the Colombia-based Foundation Shakira founded which provides education, nutrition and psychological support to over six thousand Colombian children displaced by violence.
“School feeding will be a critically important tool to ensuring the health of Haiti’s children—and their attendance at school” said Buffett. “Our foundation is proud to partner with Shakira on this incredibly important effort.”
The Barefoot Foundation will partner with Architecture for Humanity, a nonprofit design services firm dedicated to building a more sustainable future through the power of professional design. “It is vital to rebuild the educational infrastructure of Haiti. We urgently need to restore a sense of normalcy in these young hearts and minds and not allow this tragedy to dictate how they see their future. With this coalition of support we can build a holistic school that will inspire and encourage Haiti’s next generation of leaders” said Cameron Sinclair, executive director of Architecture for Humanity. Shakira was greeted by actor Sean Penn, who is providing humanitarian aid at Haitian refugee camps. The two stars spoke about challenges confronting Haiti since the Jan. 12 disaster
http://www.barefootfoundation.com