Yesterday, President Michel Martelly, back from his travel to Miami held a press conference in a hotel of Pétion ville, to make the point on his displacement and make a few clarifications "I traveled to begin opening the doors to ensure that when we begin our work on 14 May, our work gives results. You know that the workload that they [the Preval government] have left us is… Continue

Following allegations of fraud, following the surprising decisions of the National Electoral Complaints and Challenges Bureau (BCEN), and various irregularities in the BCEN and the Provisional Electoral Council (CEP), Ginette Chérubin, Electoral Advisor to the CEP, had refused to initial the results and provided explanations in a letter dated April 24, 2011. In the… Continue

12 Senators, in a press note released today, strongly condemned the non respect of the will of the people expressed during the vote on March 20. Adding that before such political machinations orchestrated by the anti-national of INITE at the service of partisan interests, they undertake to defend the general interest of the nation.

For this group of Senators, the… Continue

Haiti - Politic : Reactions of Michel Martelly to the confirmation of his victory

The Provisional Electoral Council (CEP) published late in the night [after many hours of delay without explanation] the final results of the second round of presidential and legislative elections. Michel Martelly unsurprisingly, was declared the winner [unchallenged] of the presidential, with 716,986 votes (67.57%).

Reacting to the confirmation of his presidency… Continue

The Secretary of State Hillary Clinton, chief of U.S. diplomacy, has received the new President of Haiti, Michel Martelly, for a lunch at the State Department. which was followed by a joint press briefing. Here's what each speaker said :

Secretary of State Hillary Clinton:
Well, good afternoon, everyone. It is a great pleasure and an honor for me to… Continue

Sign of the importance of relationship with the United States, the new President of Haiti, Michel Martelly left his country on Tuesday for a three-day visit to Washington DC, before the proclamation of the final results which credits it with 67.57% of the votes [preliminary results of the second round, uncontested].

Haiti - Washington : First day of Michel Martelly all the details

Michel Martelly is visiting Washington for a three-day visit with a busy schedule. Here in detail, his first day of work.

"...we began to establish contacts with partners of Haiti, we are left with a delegation representing the team that will work with the Presidency Martelly [...] we have made meetings with different institutions, institutions that in the… Continue

Michel Martelly completed his first work day this Tuesday in Washington, where he met with President of the World Bank, Mr Bob Zoellick, and that of the International Monetary Fund, Mr. Dominique Strauss Kahn.

The president Michel Martelly, who's mission is to promote a new Haiti, has, among other things, requested to the leaders of these financial institutions,… Continue

Haiti - Culture : World Premiere of "When the drum is beating"

The world premiere of the documentary "When the drum is beating" (Tanbou frape), which tells the cross history of Haiti and of the "Orchestre Septentrional", will be held at the Tribeca Film Festival in New York, Monday, April 25, 2011 at 6:30pm.

Feature documentary, directed by Whitney Dow for "Two Tone Productions" interweaves the history of Haiti and that… Continue

To commemorate the Global Youth Service Day, the Centre de Réflexion d'Éducation et de Débat (CRED) has organized a weekend of activities from Friday 15 to Sunday, April 17, 2011, through three major cities, including the city of Jacmel, the Gonâve and Port-au-Prince. Awareness sessions and volunteer efforts have been made ​​in these major cities with the support of… Continue

Haiti - Politic : There is no alliance between Guy Philippe and Michel Martelly

Guy Philippe, leader of the Front for National Reconstruction (FRN) and ex-police commissioner and Chief of the anti-Aristide rebellion in 2004, has affirmed this weekend on a radio of the capital, that although he supported the candidacy of Michel Martelly he had not concluded any alliance with the elected President.

He specifies that if the FRN… Continue

The President René Préval received Friday at his private residence in Laboule the next President Michel Martelly. The meeting began around 8:30am. It was attended by two Presidents and their spouses, Elizabeth Débrosse Préval and Sophia St-Rémy Martelly and was followed by a working lunch, on major issues…

Haiti - Politic : Vision of Michel Martelly on its future Government

In an interview granted to the Creole of the Voice of America, the President Martelly has made ​​the point on the future Government "...We only have 3 people in Parliament, three representatives but I must say that our vision, our approach is different from the Executive of the outgoing President [...] We see that all members of parliament, whether Deputies or Senators,… Continue 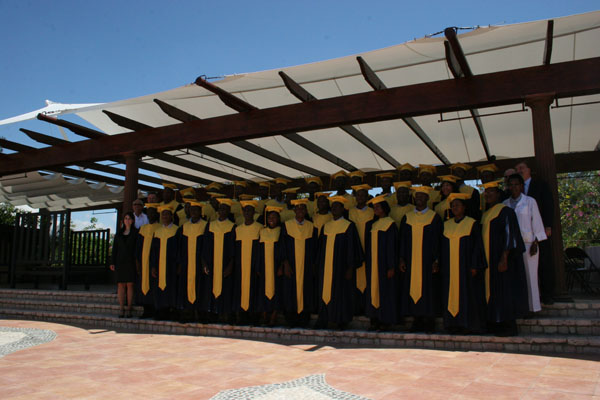