The National Directorate of Water Supply and Sanitation (DINEPA) has selected Suez Environnement for accompany them during three years in an emergency plan to rehabilitate the water and sanitation services in the metropolitan area of capital Port-au-Prince.

Maison Henri Deschamps (RETEL), the leading publishing company for the education sector in Haiti, announces the launching of its new information technology division, RETAL, to build a state-of-the-art data center in the nation's capital, Port-au-Prince.

In addition to serving Deschamps' enterprise needs, the facility will be the backbone of a vision that started… Continue

Haiti - Jacmel : Rebuild the cathedral, but not without mission

Bishop Launay Saturné, Bishop of Jacmel in Haiti, appointed the April 28 by Pope Benedict XVI has expressed his desire to rebuild the cathedral of the city, which is a "symbolic place and of unity", a place that has been heavily damaged by the earthquake of January 2010.

"No reconstruction without mission"
Mgr Launay Saturné, however, insisted that… Continue

Haiti - Elections : Tours and support of both candidates...

The tour of the two candidates continues across the country and beyond borders. Mirlande Manigat made a campaign of proximity putting the emphasis on the competence, the morality, the éducation She courted the religious voters and women voters with few detail on its commitments and no big promises. For his part, Michel Martelly explains his program and made promises like… Continue

Within the framework of the risk reduction of natural disasters project and more particularly in the context of attenuation of earthquake threat, the United Nations Development Programme (UNDP), delivered to the Haitian institutions the macroseismic zoning maps of Port-au-Prince, a crucial tool for all projects building in Haiti. Developed in collaboration with the National… Continue

The cooperation of Cuba and Brazil in the strengthening of the national health system in Haiti, as part of the Tripartite Commission is well under way, one year after the signing of agreements has declared Dr Carlos Felipe Almeida Oliveira, Cuban Coordinator of the Project at the Ministry of Health.

The Brazilian representative met this week with Dr. Lorenzo… Continue

Haiti - Education : Training of the future managers of digital spaces

Under the deployment of the Plan of Digital Distance Education in Haiti (PENDHA), the Superior School of Infotronique of Haiti (ESIH) and the Agence Universitaire de la Francophonie (AUF) with the assistance of the International Atomic research institutions for development (IADR), the Embassy of France and the Fondation de France are organizing a training workshop in… Continue

Haiti - Jacmel : High-tension within the justice...

Me Françoise Moraille and Me Franck Lauture two alternate commissioners to the prosecution of Jacmel are at "daggers drawn" with the government commissioner Vladimir Yayo for several days. This situation occurred after the two substitutes have sent a letter to Mr. Vladimir Yayo concerning their suspension of work and require to the haitian State 15 months of wage arrears… Continue

Haiti - Reconstruction : NO to the transformation of the Minustah

The Colombian diplomat, Maria Angela Holguin, last week in Bogota had envisaged, with the Security Council, the possibility of transforming the Minustah mission in a development operation for Haiti. In an official statement, the diplomat confirmed that the possibility of transformation of the Minustah will be discussed and supported by the Colombia to the United Nations in… Continue

Haiti - Telecommunication : New Director General at the head of CONATEL

The President René Préval has conducted Tuesday to the appointment of a new Director General at the head of the National Council of Telecommunications (CONATEL). The Investiture ceremony was presided by the engineer Jacques Gabriel, the Minister of Public Works, Transportation and Communication (MTPTC).

Jean Jonas Elysée, will replace Marcelin Montaigne at the… Continue

Haiti - Justice : A trial against Duvalier is impossible !

At a press briefing Monday to present the legal case of "Baby Doc", the lawyers of the former President, returned in his country after 25 years of exile have declared that a trial, whether for crimes against humanity or corruption, against Duvalier was impossible.

For some women they feel the need to look a certain way in other to appeal to society and to keep up with the Jones. For others it is a mean to stay true to trends and fashion. I was once that woman that felt the need to be with the norm. When I turned 25 years old I started to re evaluate my thinking process. I wanted to be more like my creature intended for me to look. I started to do away with extra steps to look european and I started to gravate to being more afro-centric. I cut…

How VOILA Is Supporting Free And Fair Elections In Haiti 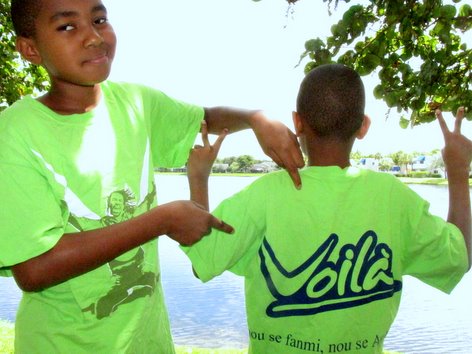 Haiti - Elections : Michel Martelly makes an update on his beginning of campaign

During a press conference at the Hotel Oloffson, Monday, Feb. 21, in front of the press and broadcasted live on the internet, the internet users were able to intervene, the presidential candidate, Michel Martelly has presented Monday a review of his beginning of campaign, that he described of positive. He described as "historic gathering" the opening of his campaign last… Continue

Haiti - Elections : Digicel is implementing its information service for elections

In order to facilitate the smooth running of the Haitian electoral process, the company Digicel makes freely available to the population, a messaging service (SMS) from which the citizens can obtain informations relating to the second round of the presidential and legislative elections.

With this service, the citizens can send a SMS for free from their mobile… Continue

The presidential candidate Mirlande Manigat, after launching her campaign Friday to Solino, was yesterday Monday at Cité Soleil, her second election rally in poor neighborhoods.

In front of a large crowd, surrounded by several children, the candidate has promised to tackle the problems of the classical and vocational education, of the health and the status of… Continue

Haiti - Education : Reopening of the library of the Ministry of Foreign Affairs

According to the coordinator of the organization Claire Wollenschneider Bibliothèque Sans Frontières (BSF) (Library Without Borders) during the last twelve months has worked for the reopening of the National Library of Haiti, closed since the earthquake of January 12, has opened libraries in refugee camps in Port-au-Prince and allowed the formation in Haiti and in France of… Continue

Haiti - Elections : Major clean up in the electoral process

At an information meeting with the political parties last week at the club International on the route de Frères, Gaillot Dorsainvil, the President of the Provisional Electoral Council (CEP), accompanied by several electoral councilors has indicated that the March 20 election will be different from that of November 28, to avoid repeating the mistakes of the first elections… Continue

Max Alcé, the Charge d'Affairs of Haiti in Jamaica, that had been recalled in Haiti for consultations after the expulsion by the Jamaican authorities of the national football team under 17 years (U-17) who participated in the final phase of the playoffs for the football World Cup, is arrived Friday, in order to report the facts to Marie Michèle Rey, the Minister of the… Continue